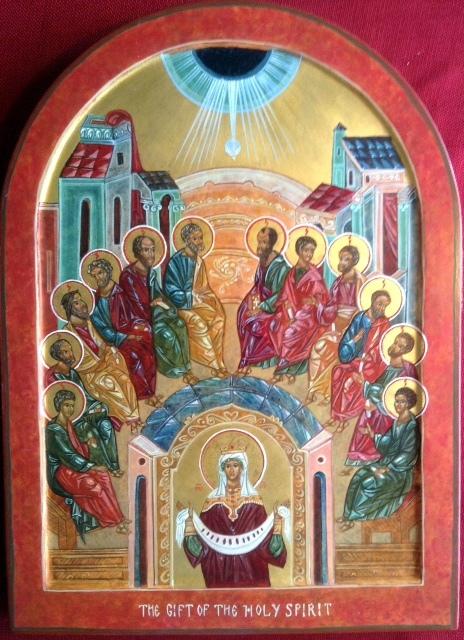 In this icon we see the apostles receiving the Holy Spirit.  The dove is coming down and there are flames above each head.  Mary holds a linen cloth filled with seeds of Logos, the Word of God. 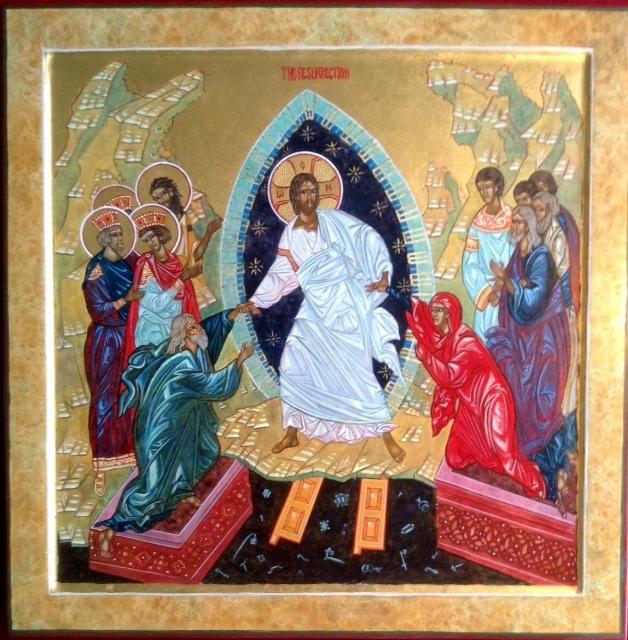 God is resting on the 8th day after creating the world.  This is paradise and God is shown as Logos, the Word of God.  He rests but never sleeps.  He is always protecting us.  Mary is seen at the left, praying for Him to become incarnate.  St. Gabriel is asking Him to become incarnate and save the world.  He holds the cross and a lily (for purity).  A little angel is above with the instruments of the passion.  The frame represents the hedge that protects us.  Before Adam and Eve sinned, they were protected.  We are protected when we are in the state of grace.  The four corners have symbols of the evangelists:  Matthew, Mark, Luke and John. 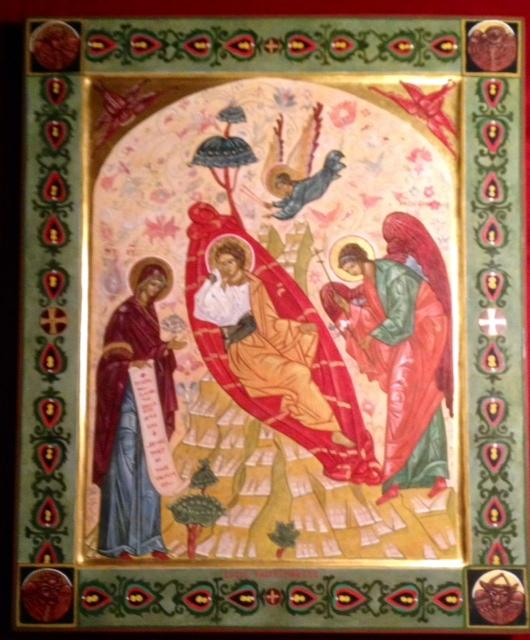 In this icon we see Mary traveling into the hill country to visit her cousin, Elizabeth who was pregnant in her old age with John the Baptist.   (Luke 1:39)  The babe leapt in her womb.  You can see the two babes in the womb, that of John and Jesus. 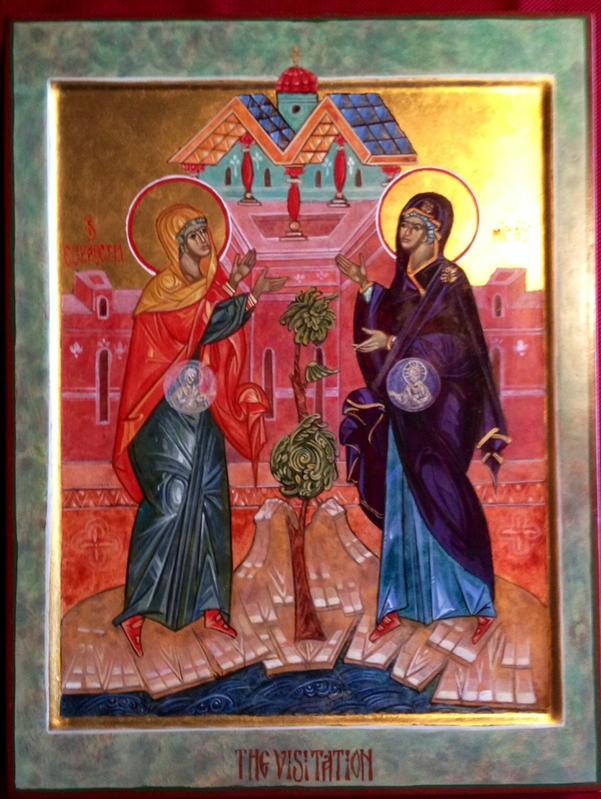 CRUCIFIXION AND DEATH OF JESUS

In this icon of the Crucifixion we see Mary and John standing near the cross. (John 19:25) The wall signifies that Jesus was crucified outside the wall.  The torn curtains are from Matt. 27-51.  AT the bottom we see the skull of Adam.  At the top "Jesus, King of Glory" 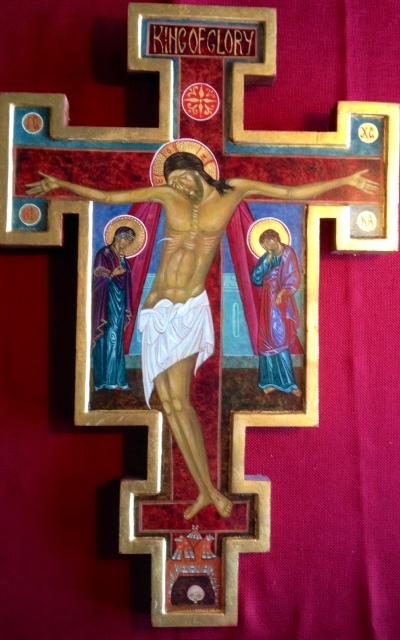 ICONS THAT TELL A STORY. 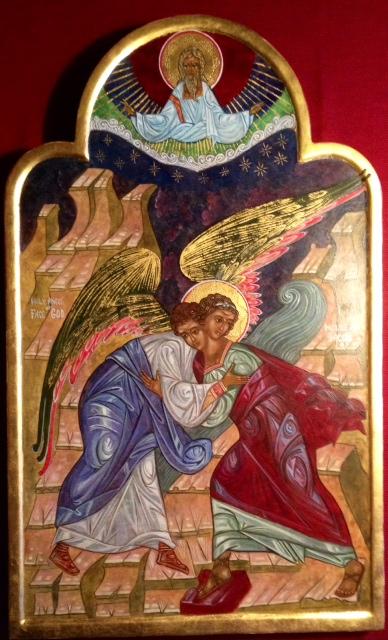 JACOB WRESTLING WITH ANGEL OF GOD

In the book of Genesis, Chapter 32 we see Jacob wrestling all night with the Angel of God and his name is changed to "Israel". This was an important event in our own Christian history.  "Because you have been strong against God, you will prevail against men." (Gen. 32:28)

Archangel Gabriel announces to Mary that

she will conceive and bear a son. 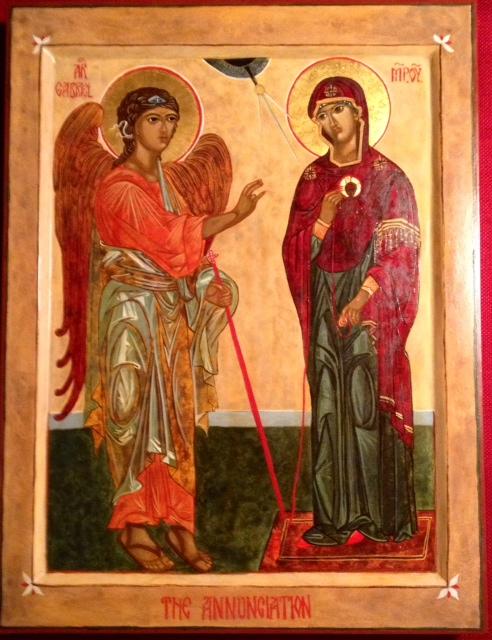 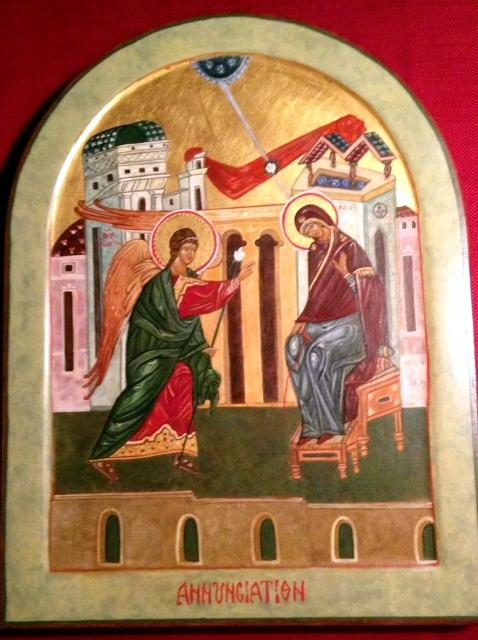 The Archangel Gabriel appears to Mary while she is sewing, she has the thread in her hand, the Holy Spirit is descending like a dove and she conceives the Christ child by the Holy Spirit. 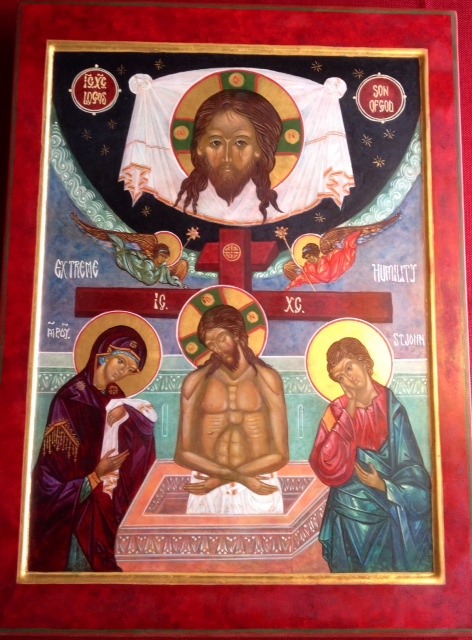 In this icon we see Christ resting in the tomb, peacefully, accepting of everything.  He appears to be growing out of the tomb.  His mother holds a cloth which could be his swaddling clothes (remembering his birth) or it could be his burial cloth for his face.  We see John grieving over the loss of his best friend.  We see the wall.  (He was crucified outside of the wall).  In the sky we see the veil of Veronica and the promise of the Resurrection.  The two little angels carry fans that are used in Liturgical ceremonies.

In this icon we see Jesus rising from the dead like a rocket and breaking open the gates of Hell.  We see Adam on the left and Eve on the right, rising from their tombs.  On the left stands King David, King Solomon and another king with John the Baptist pointing to Jesus.  On the right are other people:  Perhaps, Abel, Abraham, Issac and others. 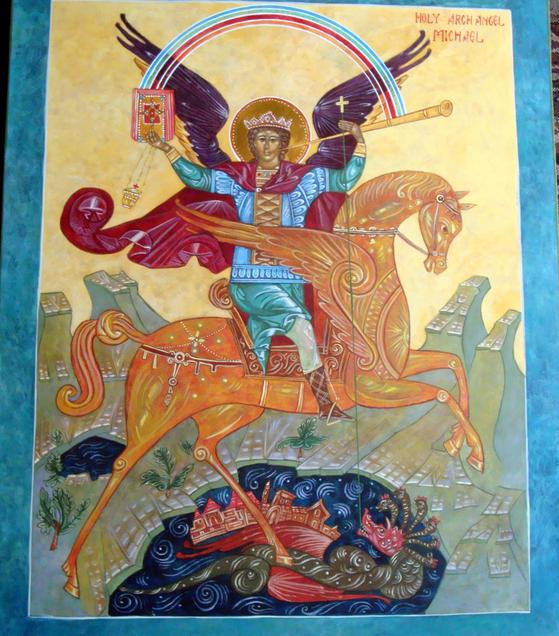 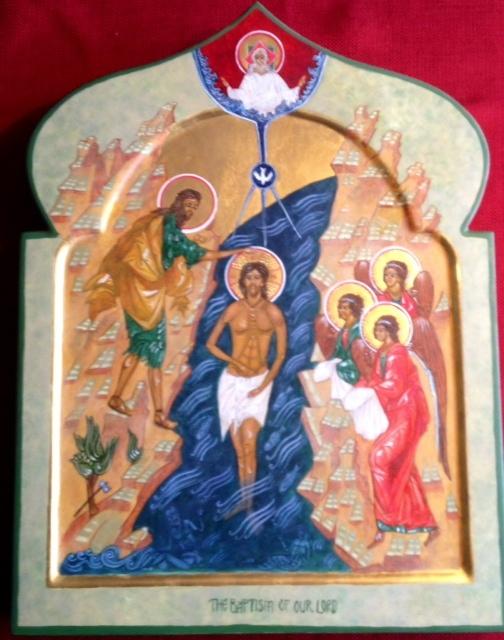 This icon represents Revelation 12 which tells the story of St, Michael who battles the dragon and drives him out of Heaven.  St. Michael defeats the enemy by using the Word of God (the book) and the Sacraments (censor) and the cross.  He blows the trumpet to announce the victory.  The dragon is shown with seven heads, etc., with the world on his back.  He has won the people over by keeping them so busy that they no longer have time for God.  They forget about God.  The Dragon is shown in a sea of blue which represents the cosmos.

The Baptism of Jesus

The icon of the Baptism of Jesus is also called "Theophany".  A visible revelation to humankind of God.

In this icon we see St. John the Baptist on the left as he baptizes Jesus in the Jordan River.  On the right are angels attending with towels.  A tree with an axe symbolizes the tree that does not bear fruit will be cut down.  Above, we see God sending down the Holy Spirit in the form of a dove and in scripture it is written, "This is my beloved son, in whom I am well pleased.   In the water we see two sea creatures that represent the River Jordan and the Sea, both fleeing at the sight of something bigger than themselves:  the fact that Christ baptized creation.